Product was successfully added to your shopping cart.

A science dealing with the study of sound waves.

Loudspeaker system with built-in power amplifier and, in most cases, signal processing and/or equalization to optimize the interface between the speaker unit(s) and the electronics. An active speaker may be driven from almost any low level line output available on A/V and multimedia equipment plus personal stereo components, such as mp3, iPod and CD players.

Amplifier
Electronic system used to boost, or increase signals to drive loudspeakers. It can be a single box or separated into two - pre-amp and power-amp.

Connection of a loudspeaker system to one amplifier via two, often different, speaker cables. A popular way to fine-tune the sound by exploiting the virtues of various cable designs. Requires loudspeakers with separate low and high range terminals and crossover sections.

A vented loudspeaker enclosure in which the rear waves from the woofer(s) emerge through an opening or bass reflex port that is tuned to the woofer characteristics. A correctly designed bass reflex enclosure may feature higher efficiency and/or deeper bass than e.g. an acoustic suspension cabinet.

Increasing power (up to four-fold, depending on the amplifier’s power supply capability) by connecting a stereo power amp for use in mono, then adding a second "bridged-stereo" amplifier for the other channel. Note that this can only be achieved with amplifiers that are designed for that purpose.

Subjective term describing the listening experience when the sound is not close to the original. Examples of coloration include warmness and harshness.

Compression is when the amplitude is "squashed" to reduce the level difference between the loud and soft parts of the music (the peaks and dips on the wave form). This is often used by radio stations to improve the sound of cheap radios with limited output capability when played loud. It is usually avoided in Hi-Fi, because it restricts dynamics. However, with powered subwoofers, a form of compression called soft clipping can be useful to avoid the harsh sound of transistors clipping when the amplifier is used near its limit. It’s similar to the way valves (tubes) limit their output.

The frequency at which equal power is delivered to each of the adjacent units in a multi-way speaker system. In a typical two-way system, the crossover frequency between the woofer and the tweeter will be set around 2.500 Hz.

Direct Current. Power derived from a battery or rectified source where electrons flow only in one direction.

A logarithmic scale that measures changes in sound pressure or electrical power. A change of 1dB is just about audible, while +10dB sounds as though the original sound level has been doubled in volume. Doubling the power output of an amplifier gives an increase of 3dB.

The re-radiation of sound waves at discontinuities such as cabinet edges. The time-delayed wave interferes with the original sound output, causing peaks and dips in the frequency response.

Storing the sound as a stream of digits (0s and 1s). This method of storage is used by CD, DAT, DCC and mini-disc, for example.

In Home Entertainment, a dual surround speaker design consisting of two systems operating out of phase. Combined with an acoustic cancellation, this creates a diffuse sound field (ambient and spacious). Dipolar surround speakers are required by the Home THX specification.

How widely and evenly a speaker spreads its sound. A speaker with narrow dispersion beams its sound forward like the beam from a flashlight. A wide-dispersion speaker evenly covers the entire listening area with sound.

Unwanted signals or changes to the signal added by cheap or not well designed Hi-Fi or Home Cinema equipment.

Anything with a voice coil and a magnet - a woofer, midrange or tweeter. Another name for a speaker.

Digital Theatre Systems: Multi-channel digital surround system that encodes and decodes audio signals enhancing the fidelity of the signal to produce high quality sound. It is used in some movie theatres and is also available in some home theatre digital processors.

The difference between the loudest and softest sounds that can be reproduced by a device or format.

Quoted in Hertz, it represents the range of frequencies, from bass through to treble, that the system is capable of reproducing in a linear manner, ie. without significant accentuation or attenuation. This response should be as flat and as extended as possible. The linearity is quoted within a certain amplitude limit, expressed in dB. A limit of +/-3dB is often used.

Terms used to describe audio-video systems which permit home based reproduction of movies and multi-channel movie soundtracks. A specialized signal processor (Dolby Surround, Dolby Pro-Logic, AC3, THX) is used to decode the signal and distribute it to the various loudspeakers.

Impedance is to AC signals what resistance is for DC signals. Measured in Ohms, it may vary according to frequency. A low impedance device (under 4 ohms) will draw more current from an amplifier.

Incredibly tough woven material developed by DuPont. The woven fabric is also used to provide strength in bulletproof vests and sailboards. Properties of lightness, stiffness and asymmetry are ideal for wide-range loudspeaker cones. (Kevlar® is a registered trademark of DuPont)

Speaker driver assembly that produces sound frequencies in the middle of the whole audio band (approximately 300Hz to 4kHz). The Midrange driver receives its signals via the crossover.

A musical term that refers to the complete range of tones in the musical scale. (Do, re, mi, etc…). In audio terms, an octave is a halving or doubling in frequency (Hz). For example, middle C on the piano keyboard is 256Hz. The C an octave higher would be 512Hz. The human ear can hear approximately ten octaves, from 20-20,000Hz.

Unit of electrical impedance or resistance to current. With lower impedance speakers, more sound pressure will be obtained from a given amplifier, but at the expense of drawing more current and producing more heat at the amplifier’s output stage circuit.

How loud a speaker can play with a specific amount of power input measured by a microphone placed at a specific distance. Typically, 2.83 volts at 1 meter, on axis.

A system designed to produce only bass frequencies. It can be an active or passive system.

Specialized speaker for the reproduction of special effects and ambient information contained in a multi-channel Home Theater system. Usually available as surround speakers to be placed at the rear or dipoles to provide a diffuse soundfield from the sides.

THX, developed by the famous director George Lucas, is the founder of many patented High-Quality Audio and Video technologies. THX has developed a set of standards for audio and video equipment and is certifying products that meet these strict requirements.

2. The basic measuring unit for electrical or acoustical power.

The large drive unit in a speaker that produces bass frequencies.

He graduated Jordan Misja art school with high scores and the Academy of Arts in Tirana as sculptor. He lives in Athens from 1991 until today.

In 2006, he started developing a project in the field of sound sculptures in cooperation with Crystal Audio. Crystal Audio presented the first sculptures at the IFA Berlin Show 2006.

His creations are part of private collections and adorn the environments of well-known families in Athens, Europe and the United States.


The Art of Sound represents the beauty of Sound Innovation 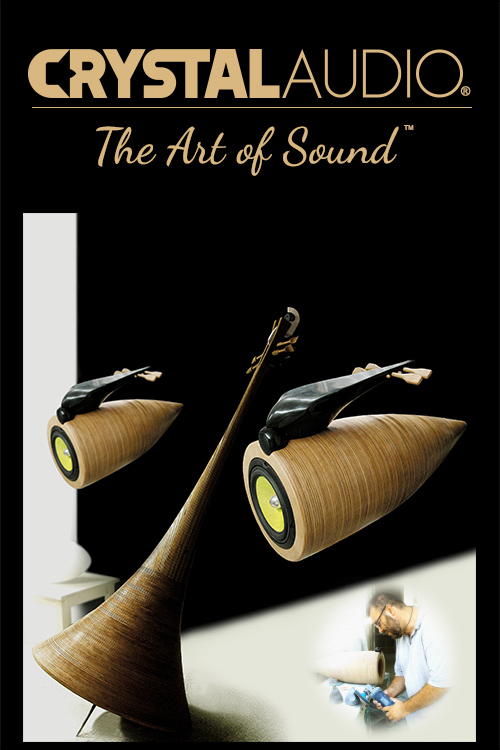 He graduated Jordan Misja art school with high scores and the Academy of Arts in Tirana as sculptor. He lives in Athens from 1991 until today.

In 2006, he started developing a project in the field of sound sculptures in cooperation with Crystal Audio. Crystal Audio presented the first sculptures at the IFA Berlin Show 2006.

His creations are part of private collections and adorn the environments of well-known families in Athens, Europe and the United States.


The Art of Sound represents the beauty of Sound Innovation
Use cookies to get the best browsing experience.
Accept More information